The average number of inmates in Japan's prisons for the year 1990 was 48,243 per day. The number of penalties meted out to inmates in that year was 27,211. Although some inmates received more than one penalty, assuming one per inmate, the figure is equivalent to about 60% of the entire prison population. This ratio is unusually high in view of the low incidence of violence against guards or rioting.

There are 11 types of penalties imposed on inmates. The penalty in 80% of the cases is disciplinary confinement. In most cases, this includes prohibition of reading, writing, exercising, bathing, visiting and writing or receiving letters. The inmate is required to sit all day long in a designated place within his cell. All reading material is removed from the cell. This inhumane penalty is imposed not only on convicts, but unsentenced inmates as well, who should be presumed innocent until found guilty.

Article 59 of the Prison Law provides simply that "Inmates who violate rules shall be punished." Nowhere is it specified what constitutes a punishable rule infraction. Therefore, the most trivial violation s of the rules set by the director of the prison, whose meticulous prohibitions cover every detail of prison life, are punished. As typical examples of prison rules, the Tokyo Detention Centre provides for the following rule violations: * Non-compliance with a directive from a guard * Illicit communication, including speaking to someone outside a window, signalling or exchanging written material Protests against unfair orders from a guard are regarded as violations and, as such, punishable. It is very common for guards to arbitrarily define the behaviour of an inmate they don't like as being a violation of some sort and to impose punishment. The result is that prisoners are put in the position of having to be obsequious and absolutely obedient. When convicts receive penalties, they are liable to the additional hardship of having their grade status lowered or their paroles delayed. Inmates are forced to address guards as "sensei" and honorific used in normal society only as a term of respect for teachers or other person who are erudite.

When a guard reports that a rule violation has taken place an "investigation" is conducted, after which a "penalties commission" composed entirely of prison officials (see illustration) decides on the penalty, which is then immediately imposed. The commission hears the inmates's defence, but there are never instances of a defence being accepted as valid. Lawyers are not a part of the process. The procedure amounts to nothing more than the one-sided imposition of penalties by the prison.

It is common for guards to assault and injure inmates who have rebellious attitudes, or to impose their own punishments on them. An example of a case concerning Nichibenren and local bar associations have received petitions for remedies of human rights violations are given below:

* An inmate talked back to guards while he was in the process of being transferred to a different facility. Forty jailers came running and 13 of them beat him over his entire body, causing injuries on the head and elsewhere that required one week of treatment (Osaka Detention Centre, 1983) 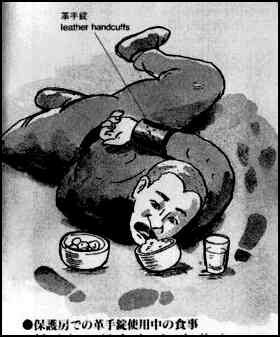 6.  ARBITRARY CONFINEMENT IN PROTECTIVE CELLS AND APPLICATION OF LEATHER HANDCUFFS.

A protective cell is a special kind of cell for temporary confinement of an inmate when there is a danger that he may hurt himself or when he is loud, violent, destructive, is attempting to escape etc. the rooms are about the area of 6 tatami mats (approximately 10 square metres). They are windowless and the interior is completely sealed off from the outside. Three covered observation ports and a television camera on the ceiling allow effortless observation. The toilet is built into the floor. Ventilation is by a fan direct from outside the building, making the room extremely cold in winter. The protective cell is used for punishment of rebellious inmates. This is a basic departure from the original purpose of the cell. Because confinement in the protective cell is not officially considered punishment, there is no prescribed procedure for its use. It is very common for an inmate so confined to be bound with handcuffs of metal or leather. The leather handcuffs are heavy straps wound about the arms that make it impossible to move.

In February, 1976, a schizophrenic inmate died of exposure to the cold after thirteen days in protective cell. In March 1992, an unsentenced foreign inmate was accused of speaking to another inmate in an adjoining cell. He was interrogated and forced to admit. He became enraged and made as if to spit at a guard. More than ten guards attacked him, bound him with a leather handcuff and took him to a protective cell for two days (Chiba Detention Centre). Bound in this way, the hands cannot be moved at all, elimination is uncontrollable and the inmate is forced to eat in the manner of a dog.

Strict solitary confinement involves long-term placement of a sentenced prisoner in a solitary cell, during which time he is not allowed to see anyone. His movement is severely restricted. He is not permitted to lie down except during sleeping hours. The justification given for this penalty is that there is a likelihood that contact with the sentenced inmates would disturb the order within the prison. Complete severance of all contact with other inmates can lead to serious neuroses. Restrictions on movement cause back pains and other ailments. There are no formal laws that deal with strict solitary confinement. The inmate so confined has no opportunity to make an appeal or to make statements of any kind. An inmate under sentence of life imprisonment at the Asahikawa Prison has been in strict solitary confinement for more than ten years.

*An inmate exclaimed, "Ah!" when a metal wash-bowl looked as if it would fall. For this, he received 10 days disciplinary confinement. (Tokyo Detention Centre 1984)

* an inmate was given 10 days of disciplinary confinement for "looking around" and "speaking without permission." The former offence consisted of wiping away sweat with his arm while in the work-house (it was mid-summer). The latter was a matter of asking the prisoner in charge of supplies for more screws because he had run out of them. (Fuchu prison, 1987)

EXAMPLE OF BRUTALITY BY PRISON GUARDS

Despite several requests by a sentenced prisoner that the prison return an old notebook, the notebook was not returned. During forced labour, the prisoner repeated his request to a guard. As he was returning to his seat, the guard grabbed his arm. With an expletive, the prisoner pulled his arm away. The guard pulled him to the ground and handcuffed his wrists behind his back. The prisoner was then taken to an interrogation room where 10 guards pushed him to the floor, kicked him in the shoulder, side and abdomen and struck him with their hands. His hands were then bound with both leather and metal handcuffs and he was punched in the face, his head pushed against the wall and in other was brutalized. (Yokohama Prison, 1990)