The death penalty is a major concern for Amnesty International in Japan. According to Amnesty International's information 94 people are currently imprisoned under sentence of death in Japan, 54 of these sentences have been confirmed by the Supreme Court - the prisoners concerned can therefore be executed at any time.

Some of those sentenced to death have been imprisoned for many years pending execution, often in total isolation. The oldest of these prisoners is now 78 years-old, and has spent 29 years in prison since he was sentenced. Other prisoners sentenced to death have died of old age in prison, often after spending more time in detention than if they had been given a life sentence. In most cases, those long periods of detention are caused by lengthy appeals procedures, by the virtual inexistence of formal pardon procedures, and by the fact that in many cases trials which have led to the imposition of death sentences have not lifted all doubts about the guilt of the accused. 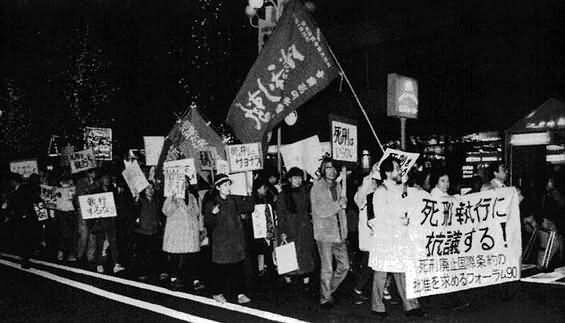 Japan's Penal Code provides that the death penalty can be imposed for many offences, but in practice it is only used for murder. Some prisoners have been executed virtually every year for several decades. However no executions occurred between November 1989 and March 1993, partly because Ministers of Justice then in office were personally opposed to the death penalty, partly because of an active abolitionist campaign. Because executions can only take place after the Minister of Justice has signed an execution order, the successive ministers' abstention from signing during that period had led to a defacto moratorium in its use, but has not led to abolition.

There has been little public debate about the abolition of the death penalty in recent years, although the 1989-93 moratorium reinforced abolitionist ranks and allowed widespread public protests by human rights organizations, religious groups and personalities when three executions ended the moratorium in March 1993. Successive governments have for decades refused to carry out a parliamentary debate about the death penalty, despite the presence of a significant proportion of abolitionist parliamentarians, coming from a variety of political parties.

Successive governments since 1989 seem never to have developed a policy about the death penalty, despite the three-year moratorium and despite calls from Japanese and foreign scholars and personalities. Successive Ministers of Justice have generally made the fight against corruption their main priority, indicating that role of the government in relation to the death penalty was to administer its use, but not to intervene in the discussion.

THE SITUATION OF PRISONERS SENTENCED TO DEATH

Conditions of detention, which are harsh for all prisoners in Japan, are draconian for those sentenced to death. Because they are technically "awaiting" execution, they do not have the same legal status as other prisoners, and therefore do not have the rights that other prisoners enjoy in areas such as visitation rights, correspondence exercise, etc. In practice their fate depends on the policies of the detention centre directors. While in some places these prisoners enjoy similar or even better treatment than other prisoners, in other detention centres there are examples of very harsh treatment: some prisoners sentenced to death have been held in almost complete solitude for years.

One of the striking aspects of the death penalty in Japan is the secrecy and arbitrariness which surround its use. These aspects seemingly contradict the official justification for the death penalty, which is that the public wants the death penalty to be used and that it is necessary as a deterrent.

All the prisoners whose death sentences have been confirmed by the Supreme Court are liable to be executed at any time, if the Minister of Justice signs the execution order. However it is impossible to know which prisoners will be the next execution victims. In the last few years, prisoners have been executed in groups of two or three on the same day, sometimes in different detention centres. But those executed seem to have been arbitrarily selected among prisoners awaiting execution: they were neither those who had been awaiting execution the longest, nor even those who had exhausted all possible avenue of recourse against execution. None of the non-government organisations in Japan have been able to explain the rationale behind the choices made, in secret and without any transparency or accountability to the public, by the Ministry of Justice.

For its part, the Ministry of Justice justifies its refusal to give any public explanation by alleged concern for the reputation of the relatives of those executed--however these relatives are among the prime victims of the secrecy as they are kept ignorant of the execution orders, and generally only find out that their relative has been executed by reading the press, or when they are told by detention centre officials that they can retrieve the body of the executed prisoner. As the authorities specifically avoid making any announcement prior to executions, the relatives of condemned prisoners never know when they visit their relative in prison, whether their visit will be the last one. Lawyers themselves remain uninformed of execution orders. Ministry of Justice officials have justified this policy of secrecy towards lawyers by telling Amnesty International that in their view, prisoners whose death sentence has been confirmed by the Supreme Court have, strictly speaking, no lawyer, because legal proceedings are over after the Supreme Court decision is made. This legalistic official position neglects the fact that many prisoners sentenced to death actually retain a lawyer beyond that point in the procedure, for example to apply for a retrial or pardon.

In one recent case a prisoner who was mentally ill was executed even though his lawyer had applied for a retrial and had notified the authorities of the mental illness.

The secrecy surrounding executions causes permanent fear among prisoners sentenced to death and their families, fuelled in part by rumours and severe restrictions on communications. In March 1993, when three men were executed, the family of a fourth prisoner had to wait for several days to receive confirmation that their relative was still alive.

To Amnesty International's knowledge, there is no formal procedure for pardons in Japan, even though the Prime Minister is in principle empowered to commute a death sentence. In the absence of a legally-prescribed procedure, the government authorities have no legal obligation to reply to a petition sent by a prisoner or their lawyer within a given time, or to give reasons for refusals and no formal rule prevents executions from taking place while a petition is being considered.

THE NEED FOR DEBATE

In recent years, successive Japanese governments have been relatively weak, as they were made up of coalitions, often with no more than thin parliamentary majorities. This reinforced the relative powers of the bureaucracy, while ministers were often unable to impose reforms. Amnesty International hopes that the present government will take the following steps:

To immediately improve the conditions of detention of prisoners sentenced to death, in particular by ensuring that they enjoy rights at least equivalent to those of other prisoners in relation to access to visitors and lawyers, and in accordance with international standards for the treatment of prisoners.

To set up immediately a formal procedure to handle pardons, ensuring that all decisions in relation to commutations of death sentences be made public, and that no execution takes place while a petition for commutation is pending.

To end the secrecy surrounding executions and ensure that, if an execution is ordered, the relatives and the lawyer of the prisoner are informed in advance and have an opportunity to meet the prisoner before execution and can verify that all possible recourse against execution have been exhausted.

Amnesty International is unconditionally opposed to the death penalty, which constitutes a violation to the right to life and is the ultimate form of cruel, inhuman and degrading punishment. Amnesty urges all governments which have not yet done so, including Japan, to suspend the application of the death penalty by systematically commuting death sentences, pending complete abolition.

It is time for Japan to join with those countries that have abolished the death penalty and bring an end to state killings.

THE DEATH PENALTY AND HUMAN RIGHTS

The existence of a law that states a government has the right to kill its own citizens is a blanket denial of the human rights of all the citizens, not just those executed; it gives the government the power of life and death over every citizen.

Between 1983 and 1989 four prisoners who had been convicted of murder in separate cases and sentenced to death in the 1950s were acquitted after they succeeded in obtaining retrials. Those acquitted were MENDA Sakae in 1983, TANIGUCHI Shigeyoshi and SAITO Yukio in 1984, and AKAHORI Masao in 1989. Before his acquittal MENDA Sakae had spent more than 34 years in prison. While these people were saved from execution it is unknown how many of the 499 people executed since 1950 were also innocent.

There is a great risk of innocent people being executed in Japan because of the Japanese reliance on the twin evils of "confessions" and daiyo-kangoku. Police detention facilities, known as "substitute prisons" (daiyo kangoku) are sometimes used to hold prisoners for up to 23 days prior to indictment. Suspects held in daiyo kangoku have been coerced into confessing to crimes they did not commit.